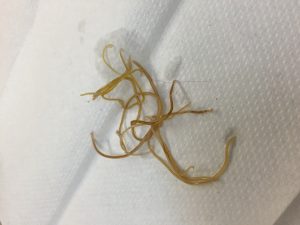 Worms ! They are not just for kittens.

The other day a distressed kitty owner presented to me a curious bunched up paper towel used after she had cleaned up after her kitty had vomited. “Worms” she exclaimed, and she wanted a fix right now. So being the veterinarian that I am, I took her precious package to the clinic’s lab area and opened up this paper towel. Yes, she was right, worms! Multiple sizes and lengths and they were still moving. Her kitty had vomited up a fairly large array of round worms mixed with a hairball. Toxocara cati , to be exact. I thought to myself, “Why would an adult 4 yr. old cat be this loaded with these parasites?” Normally the kitten is the one purveyor of these parasites, getting them from their mother via placental transfer. This is why we recommend fecal exams and anthelmintic (dewormer) every 2 weeks until they are 5 months of age. This protocol is to help decrease the load of parasites encysting in the bodies of kittens as they mature.

Again, why in a 4 year old cat. Roundworms are picked up by eating grass contaminated with roundworm eggs. Develop in the small intestine and migrate to various tissues in the body. They will remain dormant until the female kitty becomes pregnant and produces hormones and reactivates the dormant roundworms. Another way dormant parasites can become activated is a severe disease process thereby lowering the animal’s immune system to allow the worms to become activated. This kitty was previously spayed but had been on a hormonal therapy 3 months prior, and had activated her dormant roundworms to the point that they became clinically apparent. In the end she was placed on a monthly preventative to help remove and prevent these parasites.

If you would like to know more about these particular worms or other parasites please call the office for more information.